We are still unpacking and will finally be done with the old house tomorrow, but life goes on.

We were able to trick-or-treat in our new neighborhood. There were a ton of people out, but only one family was willing to make the lonely two-block trek out to our house. It was one of the neighbors in the new section of the 'hood who also get very few trick-or-treaters. We made sure to stop at the two that had lights on so we could introduce ourselves. 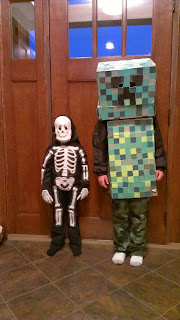 Eliana got to ride the bus to school for the first time this past Friday! Then on Saturday she got her hair cut. She had mentioned that she wanted short hair and didn't change her mind in over 24 hours, so we didn't waste any time. Grandma Lanz gave her a really cute shoulder length do. I told Ellie that I liked her "sassy new hair-do." She did not appreciate that compliment. 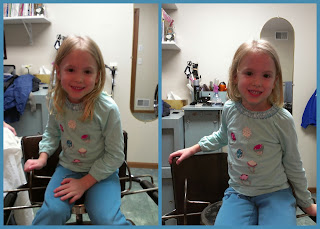 Before and after haircut

William and I were able to take a field trip to the U of M last week. He got to take part in a face recognition study which earned him a Target gift card. Then we visited the Bell Natural History Museum on campus, which now holds the top spot as his "favorite museum ever." Why? Because they have giant cockroaches, of course! 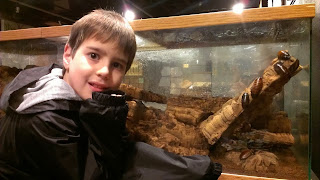 Darren has been enjoying his new workshop and is hoping to be able to park his car in the garage before the winter is out. Work has keeping him busy with two trips, one to Pennsylvania and another to Chicago, just since school started.

I'm enjoying being able to make ourselves at home in the new house. We can make messes, leave dishes on the counter, and host company without having to worry about being called for a showing. The new owner will take possession of the old house tomorrow (God willing :)).