I've been meaning to get on here for the longest time! February tends to be a crazy month for us with getting ready for trivia, playing trivia, and recovering from trivia. Speaking of trivia, our team finally finished second this year! I've been wanting a second place finish for a long time now. We've now placed in every position from sixth to first http://www.pullstartdiesel.com/past-years.

For Valentine's Day, Darren worked in the cities. It was a beautiful day, so the kids and I went sledding. Sledding reminded me that I'd been wanting to get them new ice skates all season, so we went and bought skates. That was the first time Ellie had been skating. She loved it! Although, she wasn't too fond of the stinky warming house. We went a few more times before over the last couple of weeks before the ice got too choppy from the warmer weather. 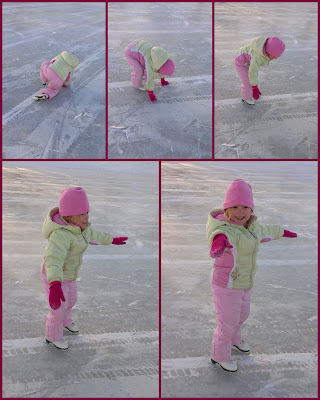 William has been loving piano lessons. We never have to force him to practice. He is often asking if he can play. The only time he isn't allowed is if Dad is on the phone for work. He recently had his annual piano festival where he plays for a judge and gets comments and ratings on his playing. For the third year in a row, he has gotten a Superior rating. He is excited to see the trophy he will get for racking up 15 points!

I found all sorts of pictures and videos on my phone from the past month or two. You can take a peek at the February and the January albums for "new" photos. Here is a link to a video of Ellie skating (Sorry I'm so loud, she was needing encouragement. She was unhappy that I refused to hold her hand for her third time on the rink.) http://youtu.be/y9jSJlKwAw0

I also found a video of William playing a new song from his Jazz, Rags and Blues book. He picks those songs up quickly! http://youtu.be/GnTQYiDzbU4